Cell proliferation is characterized by de novo DNA synthesis during the S-Phase of the cell cycle. In addition to BrdU, a common approach for DNA synthesis monitoring relies on incorporation of ethynyl-labeled deoxyuridine (5-EdU[1,2,3,4,6]) or ethynyl-labeled deoxycytidine (5-EdC[5]) instead of their natural counterpart thymidine. This traditional method however, is hampered by cytotoxicity of Cu(I) which is generated during copper-catalyzed labeling of 5-EdU/5-EdC with Azide-functionalized detection molecules (fluorescent Azides, Azides of (Desthio)Biotin or FLAG Azide) (Fig. 1A).

Rieder et al.[7] reported now a copper-free method for DNA synthesis monitoring using incorporation of 5-Vinyl-2'-deoxyuridine (5-VdU) (instead of 5-EdU) into the DNA of proliferating cells (Fig. 1B). Labeling of the resulting Vinyl-functionalized DNA is achieved via Copper-free Alkene-Tetrazine Ligation that allows to introduce a Biotin group for subsequent purification (via Tetrazine-containing Biotinylation Reagents) or a fluorescent group for subsequent microscopic imaging (via Tetrazine-containing Fluorescent Dyes). 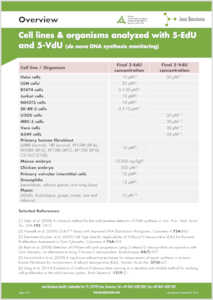 Figure 1: DNA synthesis monitoring with 5-EdU (A) and 5-VdU (B) is performed in a 3-step procedure:
1) Intracellular Ethynyl- or Vinyl-functionalization of DNA by incubation with 5-EdU or 5-VdU, respectively.
2) Cell fixation & permeabilization,
3) CLICK labeling with an Azide-functionalized detection molecule via CuAAC reaction (A)(the labeling procedure with 5-EdC is similar) or with a Tetrazine-functionalized detection molecule via copper-free Alkene-Tetrazine ligation (B). CuAAC: Copper (I) (Cu(I))-catalyzed terminal Alkyne-Azide Click Chemistry reaction.