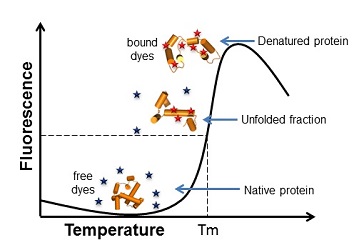 The Thermofluor Screens JBScreen FUNDAMENT and JBScreen SPECIFIC allow identification of protein-stabilizing buffer conditions which is pivotal for protein purification, characterization and crystallization.
Undesired overlay of screening of interdependent variables is prevented by strictly categorizing stability screening of proteins into

The protein’s melting temperature (Tm) is used as reporter for protein stability and determined by a thermal shift assay (96-well plate format) monitoring the unfolding of a protein in a temperature-dependent manner. The higher the Tm, the higher is the thermostability of the protein in that specific environment.


JBScreen Thermofluor FUNDAMENT and SPECIFIC are provided in a deep-well block at 0.5 ml each, which allows a flexible application of this alternative approach.

Example: Stabilizing effects on α-Chymotrypsinogen A are directly correlated with crystallizability

α-Chymotrypsinogen A was applied in JBScreen Thermofluor FUNDAMENT and SPECIFIC.
Stabilizing conditions (high ionic strength, neutral pH, CaCl2 & FeCl3) were combined without further optimization. A crystallization screen was set up:

Protein Crystallization: Simply grab the needle from the haystack 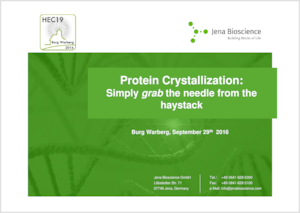 Slides of the talk 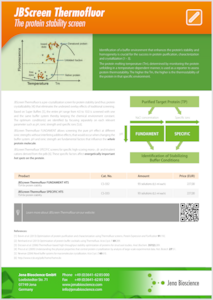 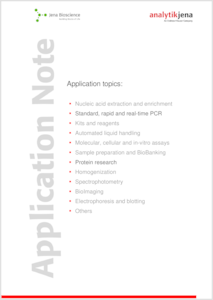