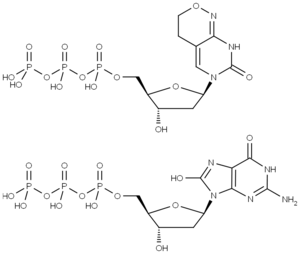 Fig. 1: Structures of dPTP and 8-Oxo-dGTP 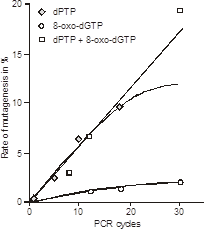 Fig. 2: Rate of mutagenesis as a function of the number of PCR-cycles [Zaccolo et al.]

Storage Conditions: store at -20 °C
avoid freeze/thaw cycles, aliquoting of the modified nucleotides prior to use is strongly recommended

Description:
JBS Mutagenesis Series
Within three billion years of evolution, nature has produced a plethora of proteins simply by repeated cycles of random mutagenesis followed by in vivo selection for superior function of the encoded proteins. This example of natural evolution has guided researchers within the last two decades to develop strategies for in vitro permutation of proteins.
Among the variety of strategies applied, three major powerful techniques have emerged.

Random Mutagenesis by dNTP Analogs
This method is based on the incorporation of mutagenic dNTP analogs, such as 8-oxo-dGTP and dPTP, into an amplified DNA fragment by PCR. The mutagenic dNTPs are eliminated by a second PCR step in the presence of the four natural dNTPs only, resulting in a rate of mutagenesis of up to 20%.
→ JBS dNTP-Mutagenesis Kit #PP-101

Random Mutagenesis by Error-Prone PCR
Developed by Caldwell & Joyce (1992) this method introduces mutations in the gene of interest using a PCR reaction under conditions that induce an increased error-rate of the DNA-polymerase. The rate of mutagenesis achieved by error-prone PCR is in the range of 0.6-2.0%.
→ JBS Error-Prone Kit #PP-102

Random Mutagenesis by DNA Shuffling
Developed by Stemmer (1994) DNA shuffling generates libraries by random fragmentation of one gene or a pool of related genes, followed by the reassembly of the fragments in a self-priming PCR reaction. This method allows the recombination of sequences from different, related genes. The overall rate of mutagenesis is approx. 0.7%.
→ JBS DNA-Shuffling Kit #PP-103

Jena Bioscience now offers all components necessary for each of these techniques 'ready-to-go' in a separate kit, accompanied by a streamlined documentation that maximizes success.

Random mutagenesis by dNTP analogs
8-oxo-dGTP as well as dPTP are mutagenic dNTP analogs which are incorporated into DNA by PCR using Taq polymerase [Zaccolo et al., Zang et al.].
8-Oxo-dGTP is incorporated opposite template adenine yielding two transition mutations: A→C:T→G. A total rate of mutagenesis of approx. 2% (Fig. 2) has been reported, with A→C:T→G occurring at a ratio of approx. 1:1.5.

The dNTP analog dPTP has been reported to be approx. 10-fold more mutagenic than 8-oxo-dGTP (Fig. 2). The mutations induced by dPTP occur at a ratio of approximately 5:4:1:1 (A→G:T→C:G→A:C→T), with a total rate of mutagenesis of up to 19%.
Random mutagenesis induced by 8-Oxo-dGTP and/or dPTP is carried out in a two-step PCR process. First, the target DNA fragment is amplified in the presence of the four natural dNTPs plus the mutagenic analogs dPTP and/or 8-Oxo-dGTP. The rate of mutagenesis can be easily controlled by the number of PCR-cycles (Fig. 2).

The product of the first PCR is then subjected to a second PCR in the absence of mutagenic analogs. This step eliminates the non-natural analogs from the target DNA before cloning and transformation.


Number of cycles: 5-30 (refer to Fig. 2)
The rate of mutagenesis mainly depends on the number of cycles (Fig. 2) and can additionally be fine-tuned by the amount of mutagenic dNTP’s [Zaccolo et al.].

Final PCR
For elimination of the mutagenic dNTPs, use an aliquot of 1 μl of the first PCR reaction as template in a second PCR. Take 10x Mutagenesis Buffer and add template, primers, dNTP Mix and Taq Polymerase in same concentrations as above. Fill up with PCR-grade Water to 50 μl.
Use the same thermocycling conditions but 20-30 cycles.