Synthetic messenger RNA (mRNA) can be used to deliver exogenous genetic information inside cells that is converted by the cellular translational machinery into the encoded protein which subsequently induces a cellular response depending on its biological function.

Their application however, was so far been hampered by the limited stability and strong immunogenicity of in vitro transcribed mRNAs subsequently leading to increased expression rates of the respective protein.

Enzymatic incorporation of a set several nucleotide analogs (single or combined) during the transcription process markedly improves the pharmacokinetic properties of in vitro transcribed mRNA both in terms of stability (increased nuclease resistance) and decreased immunogenicity (Fig. 1)[4-8].

Find more Cap analogs in the 5'-Capping section! Kits for enzymatic RNA Synthesis and poly(A) tailing are available as well. 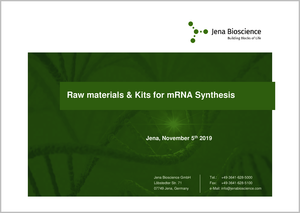