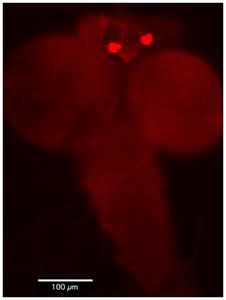 Applications:
Anti AKH I can be used for ELISA and Immunocytochemistry.

Description:
Peptides belonging to the AKH/ RPCH family are produced in cells of either the corpora cardiaca (CC) of insects or of the X-organ cells in the eyestalks of decapod crustaceans. The adipokinetic hormon I (AKH I) (also named neuro-hormone D, Baumann and Penzlin, 1984) regulate energy homeostasis in insects. The hormone mobilizes energy reserves from storage, particular from fat body. There is enough evidence to show that AKH regulates the balance of carbohydrate and lipid oxidation in flight muscles.
The anti-adipokinetic hormon I serum was raised in rabbits against the conjugate from synthetic PVNFSPNWamide glutaraldehyde-thyroglobuline.

Specificity:
The anti-AKH I serum displays no cross-reactivity with insect neuropeptides Allatostatin, Corazonin, CCAP, FMR Famide, Leucomyosuppressin, Locusta-Tachykinin 2, Perisulfakinin, and Proctolin as tested by non-competitive ELISA. Immunocytochemical methods of the ventral nerve cords of Periplaneta americana revealed a specific distribution of AKH-immuno-reactivity exclusively in endocrine cells of the corpus cardiacum but not seen in brain or other ganglia. In conclusion, AKHs are not synthesized in ventral nerve cords of insects.