Screening Kit for the purification of AMP binding proteins

Fig. 1: Possible linkages of AMP to Agarose through modification of base, sugar, or phosphate moiety 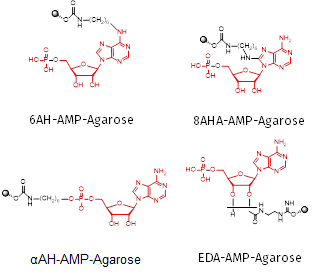 For research use only!

Storage Conditions: store at 4 °C
do not freeze

Description:
A characteristic of many proteins is their ability to bind specific small molecules (ligands) non-covalently with high affinity. This protein-ligand interaction can be used for rapid purification of a protein by affinity chromatography. In this technique, a ligand (e.g. a nucleotide) is immobilized onto the surface of a matrix (e.g. Agarose), which is incubated with a protein mixture to be purified. The protein of interest will bind to its ligand whereas other contaminants will not. These contaminants can be washed off, and the protein of interest can be eluted by an excess of free ligand in the elution buffer.
A ligand commonly used for this technique is AMP (Adenosine-5’-monophosphate) that is suitable (when immobilized onto an agarose matrix) for the purification of various NADH/NADPH- dependent dehydrogenases, ATP-dependent and AMP-binding enzymes as well as HIT family proteins (Tab. 1).
There is however, a fundamental problem with using AMP in affinity chromatography: For attachment to a matrix AMP needs to be chemically modified with a linker (Fig. 1). This linker may interfere with the protein-AMP interaction and thereby reduce the binding.
This problem can usually be circumvented by attaching AMP at a different position at the adenine base, the sugar or the phosphate moiety. Each of these linkage strategies has a characteristic effect upon protein-AMP interactions (Fig. 1).

The AMP Affinity Test Kit contains a set of 4 typical AMP-Agarose chromatography materials as well as the unmodified (blank) Agarose as a negative control.

The optimal purification procedure varies depending on the protein of interest.
Williams (1999) provides general background information on the usage of AMP agaroses that may be used as a starting point for the set up and optimization of your individual purification procedure.
The following proteins have been successfully purified with AMP Agaroses: