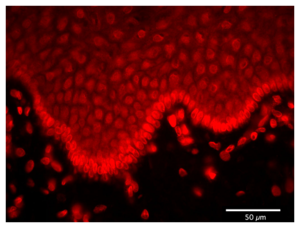 Applications:
Anti-human MsrA can be used for Western blot, ELISA and Immunocytochemistry.

Description:
Anti-human-MSRA (Methionine sulfoxide reductase, EC1.8.4.6) is a rabbit polyclonal antibody that was produced against the recombinant human MsrA. MSRA carries out the enzymatic reduction of methionine-S-sulfoxide (MetSO) to methionine in thioredoxin-dependent manner. Human and animal studies have shown the highest levels of expression in kidney and nervous tissue. Its proposed function is the repair of oxidative damage to proteins to restore biological activity. The two known splice variants of the mammalian protein are located in mitochondria and the cytosol, respectively. In addition is revealed a MSRA-immunoreactivity into the nuclei of endo-and- myometrium cells oft he human uterus (unpublished result, see Fig.)

Specificity:
Antibody specificity was evaluated by indirect immunofluorescence and western blotting.
50 μg protein of the human oral mucosa, only one band is visualized: the 26 kDa protein MsrA.
Western blots of human tissue show never a crossreactivity to other proteins but the anti-human MSRA visualized the MSRA of other mammalian. Anti-MSRA is without crossreactivity to the other MSRs (MSRB1, MSRB2 and MSRB3).