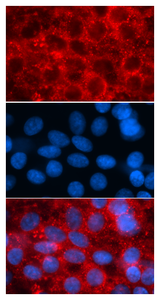 Applications:
Anti-human MsrB1 can be used for Western blot, ELISA and Immunocytochemistry.

Description:
Anti-human-MSRB1 (h-Methionine sulfoxide reductase B1) is a rabbit polyclonal antibody that was produced against the recombinant human MsrB1. Methionine sulfoxide reductases (Msrs) are repair enzymes that protect proteins from oxidative stress by catalyzing stereospecific reduction of oxidized methionine residues. MsrB1 is a selenocysteine-containing cytosolic/nuclear Msr with high expression in liver and kidney. MsrB1 occurs in two protein forms that migrate as 14 and 5 kDa proteins. Each mRNA splice form generated both protein forms (Liang X et.al. 2010).

Specificity:
Antibody specificity was evaluated by indirect immunofluorescence and western blotting. Western blot of 50 μg protein of the human oral mucosa, parathyroid and thyroid gland revealed in each case the protein band of the 13kDa MsrB1. Anti-MSRB1 is without crossreactivity to the other MSRs (MSRA, MSRB2 and MSRB3).
The antibody visualized the MSRB1- immunoreactivity into the cytoplasma of thyroid gland cells (unpublished Fig 1a). The nuclei are stained with DAPI (Fig.:1 b). In Fig. 1c is merged 1a and 1B)

Selected References:
Liang et al. (2010) Diversity of protein and mRNA forms of mammalian methionine sulfoxide reductase B1 due to intronization and protein processing. PLoS One 9,5 (7):e11497.