A major challenge in drug discovery is the identification of chemical moieties that specifically interact with a particular protein target. Traditionally, this was addressed by High Throughput Screening (HTS) however, recently “Fragment Screening” has become increasingly popular. In a Fragment Screen a set of small molecules (“fragments”), typically with MW < 300 Da and with low affinities, are evaluated for specific interaction with the target. Crystallography/X-ray diffraction shows not only whether a fragment binds to the protein but also where and how the binding occurs and is therefore the favored screening method. Hit-fragments are subsequently chemically modified in several optimization/screening cycles until a high affinity lead structure is obtained. Since such a fragmented approach allows screening of broader chemical space compared to large, distinct libraries, the hit rates of Fragment Screens are believed to be 10-1000x higher than those in traditional HTS[5].
The Frag Xtal Screen offers an easy entry to fragment-based lead discovery (FBLD) by crystallographic screening: 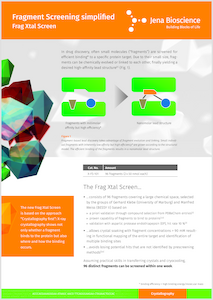